Finland: How to unionize when your boss is an algorithm and you’re self-employed

by Aleksi Knuutila A group of Finnish couriers launched the Justice4Couriers campaign in 2018. Although they are technically self-employed, they must obey the whims of their platform’s algorithm. They are fighting back. 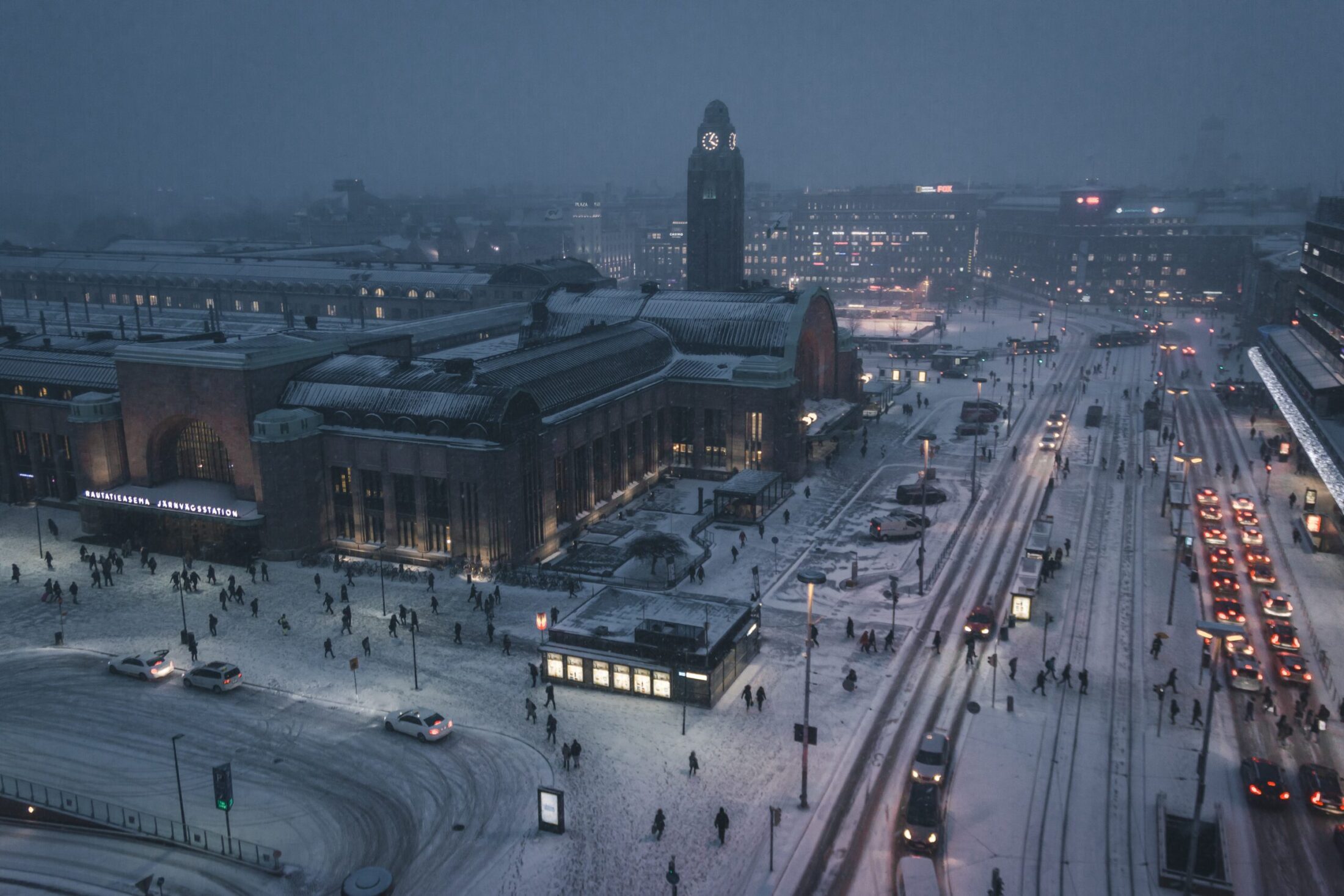 “You like to cycle, so it must be a good job for you!” This is the response that Miran Hamidulla, a Finnish student of political history and an activist, often hears that when he mentions his work. Hamidulla is a bike courier for the food delivery platform Foodora.

In a social media post, Hamidulla explained that he did indeed enjoy his job navigating the streets of Helsinki. His love of cycling, however, does not make up for the exceptionally poor conditions under which Foodora couriers have to cycle for a living.

Cycling in the central areas of Helsinki can be risky, and if Hamidulla had an accident and were unable to work the following day, he would not be entitled to any sick leave. If for whatever reason Foodora came to see him as unreliable and terminated his contract or reduced his pay, Hamidulla would have no protection.

Foodora couriers have no guarantee that they can maintain the level of income they receive from one week to the next. Legally speaking, they are not even employees of Foodora, but rather self-employed entrepreneurs with their own small businesses. This excludes them from the basic rights most workers in Finland would take for granted, such as sick leave and social insurance paid by the employer.

Hamidulla works for about 20-25 hours every week. In an interview, he explained that he earned about 750 euros per month after subtracting his taxes and insurance costs (the median monthly income for full-time work in Finland is about 2200 euros after taxes). He must also pay for the maintenance of his bike. He says that the work arrangement with Foodora is passable for him because he has other sources of income.

Hamidulla is a spokesperson for the Justice4Couriers campaign. Just taking on this role was no easy decision. He was able to do it because he does not rely entirely on Foodora for his livelihood. Not everybody is as lucky. Recent immigrants to Finland fear to speak out, as they might not speak Finnish and often work for several food delivery platforms companies simultaneously, for lack of better employment opportunities. They are most vulnerable to the consequences of the algorithmic management of work.

Food delivery is the beginning

Foodora is a platform company, acting as an intermediary between restaurants, consumers and couriers. As an intermediary, its business model is relatively new to Finland. Foodora, a subsidiary of the Berlin-based Delivery Hero, came to Finland in 2014, the same year the Finnish food delivery platform Wolt, Foodora’s main competitor, launched its service.

Like the day laborers of yore, platform companies hire their contractors on an as-needed basis. The assignment of individual tasks as well as the allocation of work shifts between workers is decided largely by algorithms. They predict the location and time of demand and decides on which individuals are best placed to do the work. The job is marketed as flexible and accommodating to would-be couriers, but flexibility cuts both ways. Platforms automatically reduce the size of their workforce when there is less demand.

This work organization in Finland is being trialed in other sectors, such as taxi drivers and home cleaners. Newspapers in Helsinki are delivered to homes each morning with labor that is organized through apps, with similarly precarious work arrangements.

People whose work is directed by algorithms usually have self-employed status as independent sub-contractors. This allows platform companies to circumvent employment regulations and to have couriers themselves bear some of the costs and risks, such as sick leave.

According to Finnish legislation, a person has to be classified as an employee, with corresponding rights, if they work under the direction and supervision of an employer. Finnish platform companies have made the case that this condition is not met under app-mediated, flexible work contracts. For instance, Foodora couriers are not required to take any specific shift or to work a minimum amount of time. Thanks to algorithmic organization, platforms can be less prescriptive than regular employers about shifts and still have enough workers to deliver the service. From the point of view of couriers, however, the arrangement can be a far cry from the freedom some associate with being self-employed.

When your boss is an algorithm

Every Wednesday, Foodora offers its couriers a choice of work shifts. The app displays a list of two- to four- hour slots with an assigned location that the couriers can choose. Getting the right shifts is important not only for one’s personal life, but also because some shifts are more lucrative than others. Lunch shifts, for instance, are especially prized, because every delivery counts on top of the courier’s hourly rate.

Foodora workers are not all equal when it comes to choosing working hours. Shifts are released in batches. The first batch, sent out on Wednesday morning, is offered only to the couriers rated as most effective by the platform. Foodora operates a scoring algorithm, and the 10 percent highest scoring couriers get to pick first. The next workers in line, with slightly lower scores, have to wait until Wednesday afternoon and choose from the remaining shifts.

Those in the fourth and last batch make their choice in the evening. At this point there are often no shifts left to select. According to Hamidulla, shifts may run out even during the second batch, particularly in calm periods such as the summer. One way in which couriers circumvent this system is by operating an unofficial black market, where couriers with a higher score sell shifts to others, using the apps functionality for assigning a replacement for oneself.

When there are fewer shifts to go around, getting a lower score on the Foodora algorithm is not unlike being suspended from work. What makes this threat particularly stressful is that the details of how Foodora’s scoring algorithm works are unknown to the couriers.

Couriers are required to install Foodora’s app, called Roadrunner, in order to receive directions for their work. The app collects a large range of information that it could take into account. Foodora tracks how long it takes for couriers to accept gigs and how many minutes they spend on breaks. Should a courier take too long to accept the next gig, the Roadrunner app makes a beeping sound, familiar from the Looney Tunes animation character of the same name. A human operator will soon send an online chat message if the breaks become too long.

Foodora does not publish the details of its scoring algorithm. Between work days, couriers receive emails telling them how their score compares to that of other couriers, encouraging them to do better. They are told what batch they are in and how many times they have been late or have not clocked in for their shifts. According to an investigation by Finnish newspaper of record Helsingin Sanomat, it is these variables, the consistency of showing up to work, that affects one’s score most.

Foodora does offer an opportunity for couriers to cancel a work shift, provided they have a reason Foodora considers acceptable. If couriers cancel a shift less than 24 hours in advance, they have to find a replacement themselves, or risk losing points. A single missed shift can push them into a lower batch.

The investigation by Helsingin Sanomat included interviews from couriers who showed up to work the day following a serious accident. They were afraid that spending the day recovering would impact their scores. In other cases, bugs in the Roadrunner app sent their scores plummeting. Because Foodora employs little staff in Finland (85 people in 2017), it can be hard to get a score corrected by a human.

Couriers working together to improve their conditions

The Bongo Cat was a short lived meme in 2018. One of its manifestations, Bongo Cat 4 Couriers, spread on Finnish Facebook and Instagram in October 2018. It encouraged people to give Foodora’s app one-star reviews to show support for the fight for couriers’ rights.

The meme was created by Justice4Couriers, a campaign group of couriers seeking to improve their working conditions. The group formed in September 2018 in response to a unilateral reduction in pay by Foodora and Wolt. The couriers participating in the campaign formulated five demands, including repealing the pay cuts, offering couriers the possibility of an employment contract and bringing transparency to the functioning of the platforms’ scoring algorithms.

Justice4Couriers used many tactics, including calling for consumer boycotts of the platforms on strategic occasions, to increase the leverage that couriers have and to force the platforms to negotiate. The campaign pushed the issue in the limelight through demonstrations as well as distributing flyers in Finnish cities. The campaign was featured in national news, for example in the Iltalehti and Iltasanomat newspapers.

So far, only one of Justice4Couriers’ demands was met. Foodora now provides a physical space where couriers can take a break between and after shifts. As a reaction to the Covid-19 pandemic, Foodora gave its couriers 12€ to buy protective equipment, much less than what Justice4Couriers argued for.

However, the campaign has successfully pushed the issue of platform workers in the political agenda. Established Finnish unions, such as the Service Union United (PAM), offered training to Justice4Couriers’ members and lobbied for law changes. The new Finnish government, which took office in December 2019, plans to review the status of platform workers and close loopholes that allow employers to avoid their responsibilities. Similar updates to the legal status of platform workers have taken place or are under review in California and Spain.

The algorithmic organization of work, with flexible working hours and location, poses challenges to collaboration between workers. It can also open up surprising new opportunities. Workers for Deliveroo, another food delivery platform, striked in Brighton in 2017, following impromptu meetings of couriers. The platform’s algorithm had told large numbers of them to wait by a central square. Callum Cant, one of the participants in the Brighton strike and a scholar, has suggested that replacing layers of management with algorithms meant that companies could not rely on traditional means of counteracting worker organization such as firing trouble-makers.

Justice4Couriers is part of an international network of groups experimenting with new ways of improving the lives of workers in the platform economy. While workers rights are important, the groups are also looking further ahead. One of Justice4Couriers sister organizations is RidersXDerechos (Riders 4 Rights) in Barcelona. They are building their own algorithms, apps and technical infrastructure, that will be collectively owned and run by the couriers themselves.

Justice4Couriers is not questioning the application of algorithms as such. In a blog post, they mention that “instead of making workers compete with one another over shifts and orders, the applications could be designed to enable greater co-operation between couriers”. Foodora did not answer a request for comment.

Algorithms are currently deployed by platforms that seek to maximize profit by shifting risk to their workers. Other algorithms are possible, which could improve the work conditions for couriers and others, and give them greater control over their work lives.