Estonia: A city is automating homes to reduce energy consumption 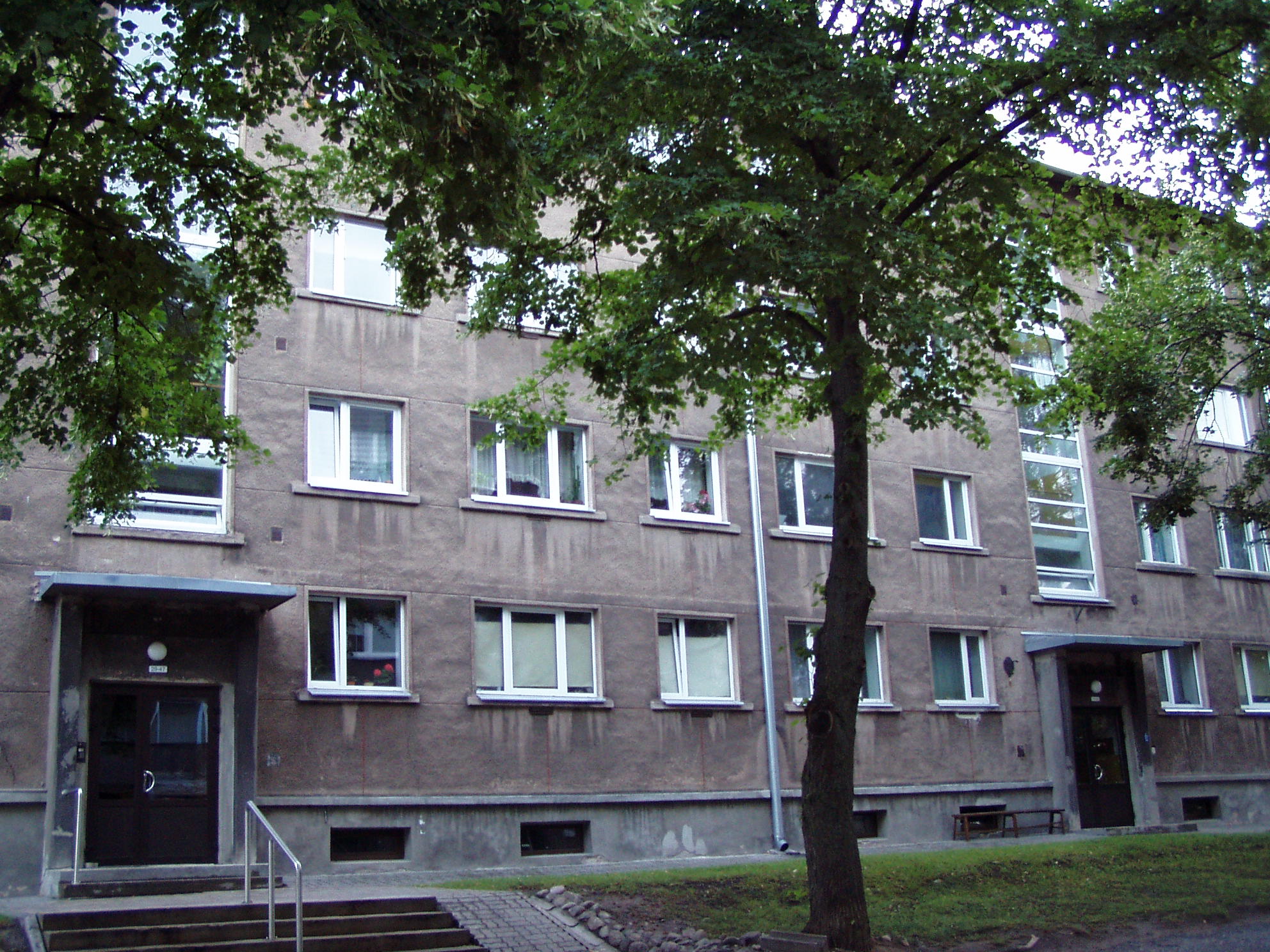 SmartEnCity is a Europe-wide project that aims to transform cities to become carbon neutral. Tartu, a small campus town in Estonia home to around 100,000 people, is one of the “demonstrator cities” for this project, which it called Tark Tartu (Smart Tartu). As part of this project, the city introduced a public bike sharing system, bought gas-powered buses and implemented automated LED streetlights that take into account local weather and traffic conditions to adjust lighting levels. They are also retrofitting Soviet era “khrushchyovkas” into “smartovkas”. This means turning old concrete-panel apartments blocks into modernized, “smart” living spaces.

Khrushchyovkas dot the cityscape of most former Soviet countries. In Estonia, they are an integral part of many neighborhoods. They have housed several generations although they were originally built to last 50 years – an estimate that was revised upwards by successive governments. The buildings are now thought to be fit for another half-century if properly renovated.

These concrete-panel apartment buildings were built between the 1950s and early 1970s, when Nikita Khrushchev was the first secretary of the Communist Party of the Soviet Union, hence their nickname of ‘khrushchyovkas’. They were easy and cheap to build, and millions of people still call them home.

In 1991, Estonia became independent from the Soviet Union, society moved on, the economy grew, cities developed, but the khrushchyovkas stayed. They are not without problems: heating is expensive because of subpar insulation, poor ventilation and deteriorating plumbing. Many of these buildings have not been fully renovated since they were built.

Renovating a whole apartment building up to current standards is no easy task. It requires a lot of work and money, and the responsibility usually falls on the inhabitants. Khrushchyovkas house families of different sizes and types, people young and old from all ways of life. Some of them have been there since the beginning. Due to lack of funds, leadership or perhaps opportunity, khrushchyovkas are in less-than-prime conditions although they sit on prime locations in Tartu.

Taking the opportunity of European funding, some of these buildings were drafted to a pilot program that promised to make them energy-efficient, high-quality living environments, with embedded, automated systems.

Taking a closer look, the reality is far from a futuristic ultra-modern automated smart home, but the project is a work in progress and the real results will become clearer in the years to come. The goal is to renovate and “smart up” 17 apartment buildings located in the center of Tartu. The systems are still being developed and perfected.

There are already tangible results. “Of course, I’m happy. The heating bills are lower, and I do not have to report my warm water and gas usage manually anymore,” said Anatoli, whose house was renovated as part of the project in the summer of last year. “My home is finished, and everything works. But in some apartments, gas and electricity consumption indicators are still not showing,” he added.

“The goal is to get the building’s energy rating as good as possible, and for that the inhabitants have to contribute with their behavior,” said Tõnis Eelma, who is one of the project's leads and the chairman of the apartment association of his building, which was the second bloc to be renovated as a part of the project.

“Every apartment has a tablet attached to their wall where they can monitor their consumption and we hope that, based on that information, people adjust their habits,” said Mr Eelma. The ultimate goal is to lower the building’s yearly energy usage down from the current 270 kWh/m2 to 90kWh/m2.

“One of the most revolutionary things is our demand-driven central ventilation system. This means that the carbon dioxide levels are measured and the influx of fresh air to your apartment is regulated automatically,” said Mr Eelma. The solution is quite unique, as usually renovated apartment buildings get a certain amount of fresh air throughout the day regardless whether you are home. The other option is that there are set ventilation intervals, which only take into account people's 9-to-5 schedule, but not the ones who are home all day, such as the elderly.

Raivo Raestik is the CEO of Enlife, the company that won the tender for developing the smart home systems for the “smartovkas”. He explained that these tablets enable two main things for the inhabitants: monitoring information about themselves and controlling their indoor climate. The system records electricity, water and gas usage for each apartment and uploads it to a cloud environment, where it can be exchanged with various stakeholders, such as the city of Tartu.

Users can view their usage statistics, the current and desired inside temperature for all the rooms, CO2 levels (measured in parts per million) and the outside air temperature. They can also check the time and greet guests through an intercom system. And if they previously had to state their hot water and gas usage to the utilities company, it is now read remotely automatically.

Ten out of the 17 buildings opted to have their building upgraded with radio connections as opposed to cable connections, meaning that their sensors are all wireless. Smart home systems also allow the user to check battery levels for those remote sensors, such as the smoke alarm or thermostat.

Users can control the temperature and ventilation and monitor their statistics through the tablet installed in the apartments, through a computer web interface or a smartphone app. Control over ventilation was given to the inhabitants in case they are not happy with the level of fresh air input chosen by the system.

Seeing statistics is part of raising energy-consumption awareness. Tõnis Eelma said that in the future they would like to offer the option to compare an apartment’s energy usage to the rest of the building. The building would then get an average, which in turn could be compared to the other renovated houses in the project, which could introduce an element of competition.

But it might not be so simple, due to peoples’ different ways of living and thinking. “We are still discussing what to compare and with whom,” said Mr Raestik. ”The first comparisons were made with the building’s average,” he said. Those stats were generated by the sum of all apartments’ usage. “But the apartments are very different. You can have an elderly person living alone or big families – that’s apples and oranges. If you see that your usage is +156% of the average, then that does not motivate you to save energy.” EnLife is rather looking to develop a statistical comparison with the user's own past behavior. “But that also needs some thought because you cannot indefinitely lower your energy consumption - you still need some level for your basic activities. We do not want people to get discouraged when they cannot lower their energy usage levels anymore.”

However, the development is still in progress. Mr Raestik said that one of the next things in the pipeline is to deliver automated scheduling for temperature levels, so that people can have lower temperatures during nights without having to manually change it from the system’s interface.

In addition to the smart home system, the houses were fitted with solar panels, insulation for the walls and roof, a new heating and plumbing system, new windows and outside doors.

There was never a solution like this in the market. In Estonia, smart homes have the reputation of being expensive and complex, and not many people have these solutions in their home unless already built in by the developer. Retrofitting homes to become smart is not so common. The SmartEnCity project ordered a one-size-fit-all solution. EnLife started developed it for about 600 apartments. They designed everything in a way that allows for retrofitting all the apartments in case of future changes, because the smart home system is evolving together with the SmartEnCity project.

Comparing this smart home system to Apple Home, Samsung SmartThings or Google Nest, Mr Eelma said that there were two main differences: those solutions would have not fit in their budget and they do not focus on energy consumption. The goal of the project is to raise awareness among people about their habits and inspire them to change their behavior to save energy.

Mr Raestik added that when you create a smart home system at such a large scale, they must consider technical support and continuous updates for as long as the building stands. “In my experience with big players, as time goes by, tech-support for older versions gets discontinued,” he said.

The city’s total investment to retrofit 17 buildings is around 9 million euros, plus 400 000 euros to develop the smart home solution. The exact cost of each building’s renovation depends on a tender. “Our house had 32 apartments and the renovations cost over a million euros. We had to cover around half of that by taking out a loan,” said Mr Eelma. Using Horizon 2020 funds, the city of Tartu helped cover 25% of the total cost and the rest came from a national renovation grant.

The first results show that on average heating bills have been cut in half. “We were hoping that they come down to one third of the original cost, but we must consider that before heat was only used to warm up radiators in apartments. Now, in addition to that, it heats up water and air in the central ventilation system,” said Mr Eelma. “But the monetary win is small, because while we can save from consuming less energy, the loan payments don’t get any lower,” he said.

The renovations came with some conditions. For example, installing solar panels was mandatory for all buildings to provide additional energy to the buildings. Additionally, while all the generated energy-consumption data belongs to the inhabitants themselves, they have an obligation to share it (in an aggregated format) with the city of Tartu until 2021 to measure the effectiveness of the renovation program.

“It is a great project; we are testing a lot of new things. But it is not ready yet – fine tuning the houses’ systems to lower costs is still ongoing,” said Mr Eelma. With 4 years and some results already under its belt, this ambitious project hopes to prove that when you give people the opportunity to monitor their energy-consumption behavior, they will change their habits to save energy in the long run. You can only improve what you can measure.