by Nicolas Kayser-Bril Google, Facebook and other very large tech companies built a lobbying system that, under the guise of furthering research or journalism, binds intellectuals in a complex network of patronage. Transparency is long overdue. 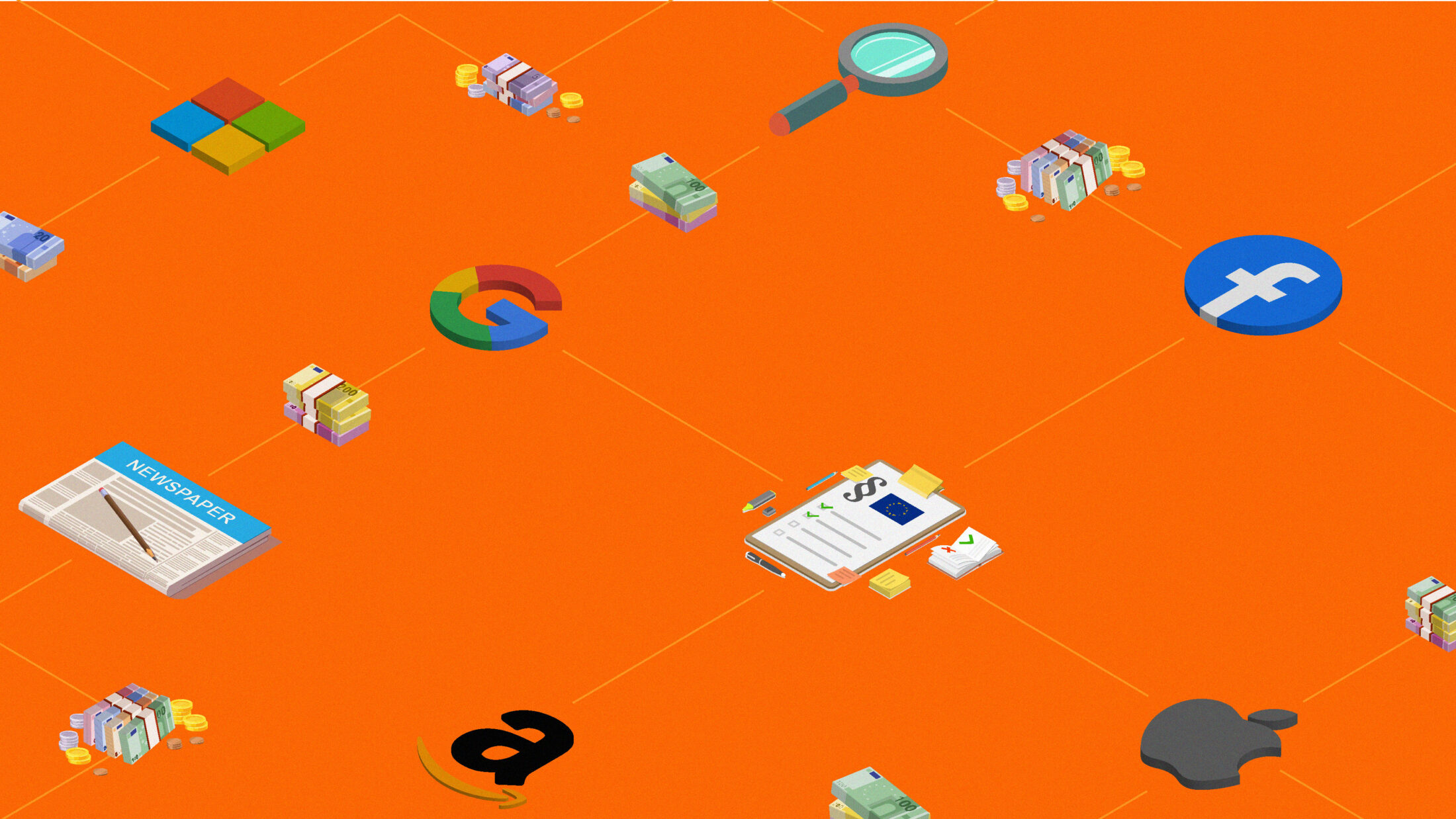 In the early 1920s, Miller McClintock was the leading expert in road traffic management. Automobiles were new and already congested cities throughout the US, and McClintock was working tirelessly to find the best solutions to keep traffic moving. But at 31, despite his fame, McClintock was moving from job to job and remained financially insecure. In the summer 1925, when Studebaker, then a major car manufacturer, offered to finance a “Bureau for Street Traffic Research”, McClintock accepted immediately to be its director.

Studebaker probably never interfered in McClintock’s research. But McClintock, who had always considered all traffic to be equal (and advocated for limited automobile use), suddenly adopted the views of car manufacturers and advocated for more and larger roads.

Studebaker’s investment in a nominally independent research institute is probably the first time an industry attempted to systematically influence a field of research without exercising direct control. Since then, Big Tobacco created the infamous “Council for Tobacco Research” and ExxonMobil bankrolled dozens of think-tanks.

Learning from the most successful, the former start-ups that now form Big Tech use the same methods. In a recent investigation, the New Statesman showed that Facebook, Google and Microsoft paid millions to research institutes linked to reputable universities, ostensibly to help further science.

The Berlin-based Alexander von Humboldt Institute for Internet and Society, for instance, received €13.8 million from Google since its founding in 2012. When they invited Shoshana Zuboff, a Harvard Business School professor and fierce Google critic, in November 2019, she said she found out at the last minute that the Mountain View giant was one of their donors. These subsidies “are part of a whitewashing intent to keep us confused,” she said. “They think we’re stupid and we’re supposed to think they’re really nice,” she added.

Facebook, on the other hand, did not count only on our stupidity, but tried to hide their involvement. They announced a $7.5 million grant to the Institute for Ethics in Artificial Intelligence at the Technical University of Munich and claimed that no strings were attached to the money. But an investigation by Süddeutsche Zeitung revealed that Facebook reserved itself the right to withhold funding from year to year if the institute’s personnel was not to their liking.

Direct institutional funding, however, is just the tip of the iceberg of Big Tech’s influence strategies. Facebook gives away millions in grants annually, asking researchers to come up with ideas to “enhance transparency in fairness and privacy” or to better understand the health and safety of the “Instagram community”, for instance. Crucially, researchers must apply with a proposal. Facebook single-handedly decides whether or not to award the grant, so that academics must guess Facebook’s red lines and refrain from crossing them.

Not everyone agrees that this could lead to self-censorship. Sergio Splendore, a sociology professor at Milan’s Statale university who won such a grant in 2020, told AlgorithmWatch that “Facebook builds a relationship of trust” with researchers. Unlike other funding institutions that have “absurd rules”, Facebook “rewards a project and then just waits for you to make it happen”. “I assure myself that I will be autonomous, serene, balanced [when doing the research]... I really don't think I will be pressured,” he added.

Some of Big Tech’s grants can prove fatal. In 2017, Google was funding the New America Foundation, a think-tank. After researchers there pointed out that Google was misusing its monopoly power, the firm promptly pressured the think-tank’s boss to fire the renegade team (Google claimed it had nothing to do with it). Tenured professors at European universities have less to fear from their Big Tech patrons, but their largesse is unlikely to be unconditional.

Researchers who do not take part in Big Tech’s patronage system can expect to face their might. Facebook hampered the work of journalists and academics who attempted to shed light on their advertising system in 2019. In 2020, Google disabled AlgorithmWatch’s advertiser account after we ran an experiment on its – potentially illegal – gender biases. In 2021, Facebook aggressively shut down a monitoring project run by New York University scholars and pressured AlgorithmWatch into destroying a tool that monitored Instagram’s newsfeed algorithm.

Researchers are not the only targets of influence campaigns. Big Oil and Big Tobacco could pressure journalists by threatening to cancel advertising budgets. A 1992 survey showed that 90% of US editors felt pressure from advertisers because of the journalism they ran. Big Tech cannot do so, were it only because they do not regularly advertise in the media.

Instead, they claim to support media organizations’ production of digital content. Facebook paid millions to US and European newsrooms to do live videos in the late 2010s, for instance. The contracts were not public, but the New York Times received at least $3m, according to the Wall Street Journal. In France, some newsrooms received up to €200,000 per month.

Not to be outdone, Google funneled about €200 million to news outlets since 2013 via the Digital News Initiative, according to a report published in 2020 by the German Otto Brenner Foundation. Most of the funding takes the form of grants, for which newsrooms must apply. The list of beneficiaries, the amounts and the contracts are not public.

This funding is so pervasive and so opaque that it can be hard for a journalist to know precisely whether or not their employer is receiving money from Big Tech.

Google organizes a yearly invitation-only conference for media professionals called Newsgeist, where vetted journalists and executives can spend time with the firm’s top public relations people, ostensibly to “creat[e] a positive, professional, and purposeful future for news in the digital age”. It also finances part of many professional conferences or organizations, such as the Perugia Journalism Festival or some programs of the European Journalism Centre.

Big Tech does not hesitate to poach former journalists to grease this Europe-wide machinery. A quick search on LinkedIn shows that dozens of individuals who used to work for major news outlets now work for Google or Facebook as “media partnership managers”. Whether or not such career opportunities could impact a journalist’s choice when covering Big Tech remains an open question.

While most of the spending does not require immediate counter-gifts from the beneficiaries, there is little doubt that it is expected of them. In June 2018 for instance, Google sent an e-mail to members of the Digital News Initiative’s working group, which included many media executive, in which it asked them to contact politicians and argue against parts of the Copyright Directive, which Google opposed.

Finally, Big Tech does not hesitate to target politicians directly. Like journalists, former politicians regularly move on to plush jobs with Big Tech. Laurent Solly, a former aide to French president Nicolas Sarkozy, is now vice president for southern Europe at Facebook. Nick Clegg, a former deputy prime minister of the United Kingdom, took a job at the firm in 2018.

But Big Tech’s power lies not only in its attractiveness for failed politicians and can be more direct. In October 2020, a leaked Google document showed that the company planned to “increase pushback” against EU Commissioner Thierry Breton’s plans for the Digital Services Act.

Together, Google, Facebook, Amazon, Apple, Bytedance (TikTok), Snap and Microsoft declared close to €25 million in lobbying spending in 2020, according to the official transparency register of the European Union. With three major texts being discussed in Brussels (the Digital Services Act, the Digital Markets Act and the AI Act), it is likely that spending will increase in 2021. “We’ve never seen this kind of money being spent by companies directly”, Margarida Silva, a researcher at Corporate Europe Observatory, a Brussels-based non-profit, told the New York Times last year.

Their lobbying effort is not limited to Brussels. In Paris, the same firms spent close to €5 million in yearly lobbying activities in 2019 or 2020 (not all firms reported their spending for the same period), according to data published by the French lobby register.

In Germany, the youth branch of the conservative CDU party attempted to secretly get TikTok to sponsor one of their events, possibly in exchange for access in the German parliament (the deal did not get through after TikTok recanted).

There may be more instances of Big Tech attempting to influence national politicians, and more money spent on lobbying in Warsaw, Rome, Hamburg or Berlin. As long as lobbying registers are not generalized at all levels of democratic life, it will be impossible to know.

This is why AlgorithmWatch joined the LobbyControl initiative, demanding more transparency in political lobbying efforts and limits to the amounts that can be donated to political parties (call only available in German).

The all-encompassing infiltration of Big Tech in European institutions could have long-lasting effects. Studebaker does not exist as a company anymore, but the consequences of the publications of the Bureau for Street Traffic Research are still being felt. McClintock’s biased researched influenced scores of urban planners, who prioritized highways over other amenities in the false belief that more roads would decrease congestion.

It is not far-fetched to claim that today’s climate emergency, which is due in large part to private automobiles and the lifestyle they encourage, is due in part to the automakers’ influence campaign in the early 20th century.

We should not let the same happen with Big Tech today. The technologies they deploy, especially in the field of automated decision-making, have the potential to cement old prejudices and hamper social change. Transparency alone will not prevent harm from being done, but it might help campaigners and activists better understand how and where to target their efforts.

For more on McClintock’s life and the consequences on urban planning, see Fighting traffic: the dawn of the motor age in the American city by Peter Norton (Mit Press, 2011) and Dark age ahead, by Jane Jacobs (Vintage Canada, 2010).